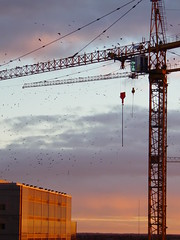 OK, I can understand why journalists like to interview famous people about their work. It looks nice on the CV.
But I’ve always thought that the least interesting articles or program segments tend to be those in which actors/directors/authors share their thoughts on their work. For instance, the BBC film review podcast that I listen to regularly looses all momentum whenever some director is invited into the studio to give synopses or even thoughts on film-making itself.

But why, you ask, have I not previously shared this important observation with you? Because I haven’t had a really good example. Till I heard this exceptional piece of cutting-edge film journalism in the Danish Broadcast Cooperation’s “Filmland”.

The journalist has sought out David Lynch who’s visiting Denmark. Lynch reveals how inside us there are deep oceans of creativity, and inspired by the rural surrounding, the reporter inquires:

Journalist: But are only humans able to access the great ocean within, or do birds go there as well?

To which, Lynch responds ponderously:

There’s some more stuff and then Lynch further reveals that:

Lynch: Now the birds they flow with nature and their songs probably have some fantastic vibration, but they go, I think, in a group. So a group of them will all go to sleep at the same time and they’re kind of ruled by a kind of a group soul I guess […] when you grow more consciousness you grow more bliss […]

But the reporter counters with a sharp

Journalist: Can’t the birds do that?

Lynch: No, birds can’t get a technique. They may flow, they may be very very happy. But no…

Seriously, and laying all sarcasm aside, this is inane beyond all comparison. I won’t be able to watch a Lynch movie for years without hearing the twitter of birds flowing with nature.