In what seems to me a difficult PR challenge to both, DR (the Danish BBC equivalent) and Copenhagen University‘s Department of Sociology have collaborated in censoring a sociology master thesis. As reported in Information (upon which the following is based) Mille Buch-Andersen did a study of the organizational culture of DR’s symphonic orchestra.

While her supervisor apparently assured her repeatedly that the master thesis was ready for submission, an angry email from DR seems to have caused a change of heart at the department who urged/threatened Buch-Andersen to withdraw the thesis and revise it before resubmitting.
Having revised and received her degree, Buch-Andersen now says (in my translation):

Academically, I am very disappointed by the department. I am also surprised – no, I am speechless about this. It’s against everything which I thought sociology to be. And it is the direct opposite of what we are taught. We learn that it is the role of sociology to uncover power relations, abuse of power and conflicts in this regard. And that it is part of the discipline that our reports can sometimes be unpleasant reading to some.

That one has to hurt.
While both DR and the department claim “breaches of research ethics” – and while I’m sure there are still-unrevealed aspects of the case – two (in this context) powerful organizations threatening a single student who claims to be a victim of politics and academic cowardice is difficult to paint in pretty colors. One wonders if far less harm had come of letting the student simply submit the original thesis; the chosen strategy seems both exagerated and desperate, as in “what do they have to hide which is so light-sensitive?”.

Various media (e.g. The Herald) report how a German study has shown racing game players to be prone to reckless real-world driving.
Crucially, the researchers seem to have found a correlation between self-reported racing game use and self-reported accident frequency.

That is not a causal link.

There might exist such a causal link but the importance of the study is being overestimated.

Not often is the game scholar mailing list GAMESNETWORK the scene of passionate outbursts.
But in the proud tradition of this blog of posting digital snippets without commentary, here’s two interesting methodological recommendations for intrepid young scholars in the field:

And for that matter too many of you are studying WoW. Stop it. You’re boring the crap out of me.

…nobody but academics and corporate marketers care about Second Life. This should be a sign to all involved. The only people I’ve met in there are researchers, academics trying to stalk other academics (me included), people selling their badly designed t-shirts, and corporate salesmen. Its my idea of hell, and research on it is my idea of a journey therein.

The Christmas issue of Game Studies has hit the streets. This implies that my own article The Games Economists Play – Implications of Economic Game Theory for the Study of Computer Games has now been revealed.

It is a source of confusion that economists for decades have worked on “game theory” while studying economic behaviour. However, while not focused on games in the recreational sense this perspective does provide a highly meticulous complementary framework for the understanding of computer game structure and player behaviour. This article attempts to extract useful analytic concepts and insights from economic game theory and to give suggestions for how these might be put to concrete use in the study of computer games. A non-technical introduction is given, the framework is applied to computer games, a brief case study is performed and finally ideas for future research are presented.

What more can you ask for?

And hey, merry Christmas out there. 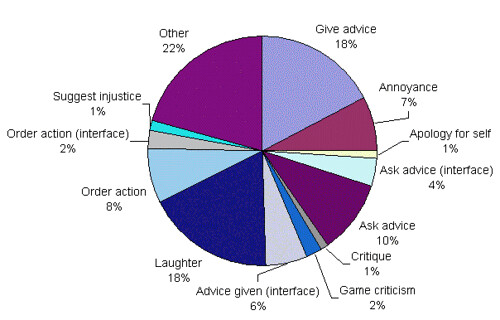 Very roughly, this graph shows the prevalence of various types of verbal statements in my dataset.
The data is verbal communication during multiplayer console play.