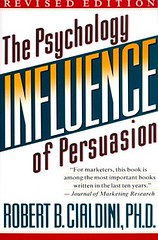 Sometimes – rarely – a book manages to forcefully alter the way you view your surroundings. For me, such books are almost always of the popular science variety. I recently, based on Thomas‘ sage advice, enjoyed Cialdini’s Influence – The Psychology of Persuasion in which the author entertainingly describes salesman’s (in the broadest sense) techniques to bend you to their will. I promise that this book will make you enjoy meeting salespeople more – even if understanding the principles (one of the interesting points of the book) does not make one immune to their dark powers.

I experienced the latter quite clearly in a recent trip to Tunesia. On our first day, a dough-nut salesman walked up to me and my 3-year old daughter offering his sugary wonders. I told him no thanks, but he was persistent and finally put a dough-nut in the hand of my daughter who promptly took a bite. He then asked for payment. To put it in terms suitable for this blog I instantly developed somewhat negative feelings towards our dough-nut friend. I told him that he had given away his dough-nut – and I didn’t pay him. He walked off and my daughter threw away the thing quite quickly. And at this point, the situation was: My daughter had had a bite of dough-nut and nobody had suffered any damage. So why did I still feel extremely annoyed: Because he had disregarded my clearly stated interest and used my daughter as part of the bargain, but also because he had made me violate the extremely strong reciprocity principle in human interaction. See Cialdini’s Chapter 2.

In a larger perspective the best of such books does the reader a great service by tying together phenomena that the brain formerly had to process individually. It collapses seemingly separate categories and thus makes room for more. They make you smart.