I have a puzzling result of my study. Do you have a suggestion for an interpretation?

I am testing the effectiveness of a “rational agent” model in explaining player behaviour. In other words, do players actually adopt the game goals as their own?

It turns out that

– YES: In terms of the gamespace (i.e. on-screen) they do. While playing the three games in my study, players conformed to what you would expect if they were simply trying to win.

– NO: In terms of their verbal interaction and behaviour outside the gamespace (i.e. in the couch) they do not. The players gave help and advice in ways that did not obviously improve their own chances of winning (e.g. they helped others a lot in a competitive game).

Is this surprising? And do you have any idea why this split occurs? 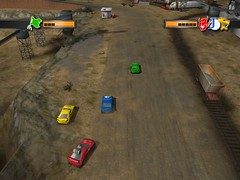