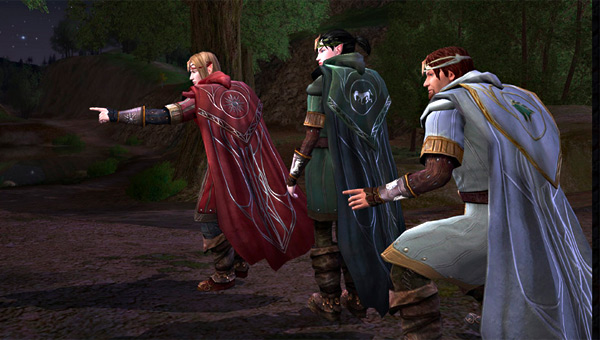 Most early video games, of course, were multiplayer games. Games like Spacewar, Pong and Gunfight, however, were also simple one-on-one games in the tradition of classical board games such as chess. At the formal level, at least, such games do not inspire cooperation since one player’s gain is the other player’s loss.

Following the simplistic and competitive successes of Pong later games introduced the possibility of cooperative play. Two schools of thought competed for quarters and screen time. In games of the 1980s like Joust (Williams, 1982), Double Dragon (Taito, 1987) players could join forces against the enemy hordes but were also likely to be unstable allies as players were able to directly hurt one another (Double Dragon even ultimately employed last man standing scoring conditions. as players would fight each other for the glory of actually winning the game). Eliminating much potential for inter-player conflict Gauntlet (Atari, 1985) and its descendants cast players in complementary roles that needed to be handled appropriately for the group to succeed.

Such experiments were obviously predecessors of the team-based Counter-Strike and are evident in many other highly popular online PC games such as Return to Castle Wolfenstein (Gray Matter Interactive Studios, Inc., 2001) and Battlefield 1942 (Digital Illusions CE AB, 2002).

In terms of gameplay (disregarding for now the broader social context in which the game exists) those games all invite social tension albeit on a modest scale. In the case of in-game resources (health potions in Gauntlet, special weapons in Double Dragon) each player may be tempted to simply gobble up as many goodies as possible. And the Battlefield 1942 player may feel the urge to indulge in personal military heroics (such as semi-suicidal air-raids) without bothering with the carefully pondered strategies of her team. This tension, however, may clearly be part of the appeal and cannot feasibly be countered without seriously jeopardizing the enjoyable player freedom offered and enthusiastically flaunted by the game worlds in question.

A remarkably different approach to game design was displayed in 1978 when Rob Trubshaw and Richard Bartle wrote the lines of code that was MUD. The system drew inspiration from earlier adventure games as well as pen-and-paper role-playing but what should interest us here is the fact that MUD was, in effect if not by intent, an experiment with social dynamics in game worlds.

Being multiplayer at heart, MUD was a virtual world in which players pursued individual goals but also shared the responsibility of keeping the world useful and enjoyable. Thus, the cooperation required by the players here is analogous to the joined effort that must be undertaken by members of real-life societies. In an important sense, then, the task of the game world designer is comparable to that of the political philosopher, attempting to describe institutions that ensure the desired levels of freedom, fairness and happiness. Experienced virtual world designer, Raph Koster, who co-manages Sony’s MMORPG Star Wars Galaxies acknowledges this:

‘I think anyone who doesn’t think that MMOs are social experiments hasn’t tried
running one yet. It’s not that you set out to create a social experiment-we don’t have test plans for our subjects, formal hypotheses to prove, or anything like that. You set out to make a game, and quickly discover that you’re suddenly a politician running a game the size of a city. You’re suddenly a social architect worrying about issues you never had a clue about.’ (quoted in Pika, 2004)

Although designers of pioneer virtual worlds such as Habitat were specific about the difficulties of reconciling the preferences of various player types (Morningstar & Farmer, 2003) many subsequent systems apparently did not fully anticipate the potential tensions between users/players. Famously, Ultima Online, in its initial incarnation, did very little to discourage anti-social behaviour among its citizens. Thus, the game world soon became rampant with grief play, a term now used to cover various types of deliberately anti-social behaviour (see discussion in Foo & Koivisto, 2004). Particularly the number of players who enjoyed preying on other players reached levels where other types of play (i.e. advancing through the game’s craft system) became hard to enjoy (Kim, 1998) as the game world began to resemble ‘Afghanistan after the Soviets left‘ (Rollings & Adams, 2003 527). The mounting in-game tension was attributed to the game’s design. In this spirit it was decided to graphically single out player-killers and to designate certain areas of the game world as safe. Thus, player-killers would be marked by a red aura and it was no longer possible to die at the hand of another player in Ultima’s urban areas. It other words, while Ultima Online did not eliminate player-killing on the code level (as many of its successors have done) the game had raised the stakes involved in blatantly anti-social behaviour, which was soon notably diminished.

Killing another player character in Ultima Online, of course, is arguably not against the spirit of the game. In a medieval world populated by monsters and assassins the case can obviously be made that killing is actually in-character, i.e. consistent with the role one has chosen to play. Such arguments fare more poorly when it comes to technical cheats. A pervasive problem in online gaming has been the creativity put to use by some players in order to exploit bugs in the games or to gain various advantages by tinkering with the game code. A measure of the problem can be gained by the proclamation by game developers Blizzard in September 2003 that they would shut down 400.000 user accounts at their game portal Battle.net. These accounts had been associated with ‘a hack or a cheat program‘ and were eliminated to ensure that the portal would remain ‘a fun and safe place to play Blizzard games’ (Battle.net, 2003).

If games were all about conflict, grief play and technical cheats would not receive such intense attention and would not give game designers sleepless nights as they attempt to foresee the next counter-move by ingenious (if immoral) players. Notably, no developer sleep is lost over the intentional conflict manifest in the aggressions of Tekken players or the drive towards mutual destruction in real-time-strategy games. Such discord is intentional and entertaining while social dilemmas emerging from human interaction are often not.