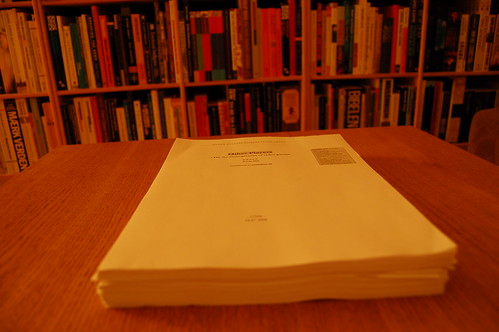 Abstract
Games shape player behaviour by presenting goals which players attempt to fulfil. This is the most common “folk” theory of the relationship between game design and player behaviour. It is also one central to most game design literature and to much work within the game studies field.
And yet, it is also clear that it is at best an approximation. Players will often behave in ways contrary to their objective interests as defined by the game goals. This may happen to satisfy social norms of fairness, to keep other players interested in the game, to avoid losing face by showing one’s disrespect for the stated goals and for many other reasons.

This dissertation is an examination of the “Rational Player Model”: The idea that players try to win. The model is applied and discussed in two capacities:

A) As a model for aesthetic analysis which can used to understand and categorize formal aspects of games related to goals. Here, video games are studied through the lens of (economic) game theory in order to determine, for instance, the types of conflict dynamics the games will elicit given Rational Player assumptions.

B) As a predictive model of actual player behaviour. Here, the model is used to derive concrete predictions about video game player behaviour which are then tested in an empirical study of multiplayer console gaming. The study shows that the model accurately explains behaviour inside the gamespace but does not explain (indeed, is often contradicted by) the verbal behaviour of the players.

Structurally, the dissertation consists of three main chapters. First, four different models of the relationship between game design and player behaviour are identified in the games literature and discussed. It is shown how the “Rational Player Model” is the predominant model within game design although one which often operates at so deep a level as to be unstated. Second, the model is discussed in more theoretical detail and employed in the analysis of games by drawing upon economic game theory. Besides categorizing games and suggesting methods of analysis based on existing concepts, the chapter also introduces a way to understand the extent to which games are strategic. Third, results of previous studies of player behaviour are discussed as an introduction to the empirical study of player behaviour in a multiplayer console game context.

The dissertation contributes by elucidating often implicit player models inherent in much games scholarship, by showing the exact analytical and predictive implications of applying the highly common “Rational Agent Model”, and by testing the explanatory strength of that model as regards actual player behaviour. Through the latter, the dissertation also contributes to a limited pool of knowledge on video game player behaviour more generally.