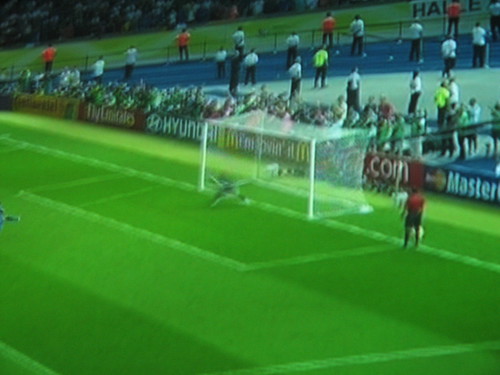 Economist Ignacio Palacios-Huerta of Brown University has studied thousands of penalty kicks. Penalty kicks are theoretically wonderful since they constitute 2-player zero-sum games where players have very few available strategies and where the outcome is decided immediately after the initial action.

Palacios-Huerta found that no strategy is inherently better. And that soccer players (as opposed to the typical lab subjects of behavioural game theory) manage to play truly randomly (the way they ought to if they are following basic game theory assumptions):

…professional players are found to be capable of behaving perfectly randomly. Their sequences neither exhibit negative or positive autocorrelation, and choices do not depend on one’s own previous play, on the opponent’s previous plays or on past outcomes.

According to the author, these results are close to unique, i.e. the observed behaviour (supporting the model) has not been seen in other experimental contexts.

The article is a fascinating example of how games (in our sense) and game theory (in the economist’s sense) may be reciprocally fruitful. Which was the larger point of Edward Castronova’s recent article Castronova, E. (2006). The Research Value of Large Games: Natural Experiments in Norrath and Camelot. Games and Culture, 1(2), 163-186.