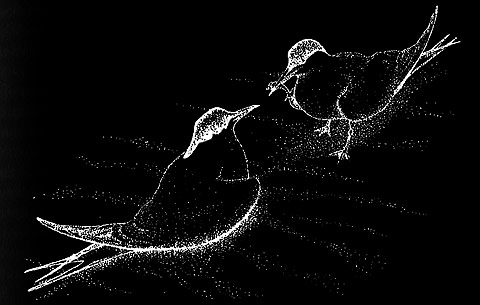 Carrying on my interest in trust and signaling, I just finished reading Amotz and Avishag Zahavi’s “The Handicap Principle“.
Briefly, the handicap principle is the idea that to send a trustworthy signal one sometimes has to accept a handicap. Taking on this handicap proves to the receiver of the signal that the transmitted statement is true.
For instance, in order to convince a skeptical observer that you’re a world-class swimmer you may have to get wet. You could choose to just say it (“Seriously, I am a world-class swimmer”). But that signal would not be reliable.
Similarly, the Zahavis argue that the male peacock lugs around his beautiful tail (handicapping himself since he is more easily spotted, less agile etc.) in order to reliably signal to the female that he is made of strong genetic material. He could have “told” her in other ways, but the tail is an unfakable signal.

There’s a decent intro to the theory of honest signaling here.

“Depending on your viewpoint, they [the Zahavis] act like (1) dangerous hyper-adaptationists even more extreme than Steven Jay Gould?s worst caricatures of Richard Dawkins and Dan Dennett, weaving just-so stories out of thin air, (2) harmlessly entertaining, pseudo-scientific fabulists in the tradition of Sigmund Freud and Margaret Mead, (3) classical Victorian natural historians (somehow displaced to contemporary Tel-Aviv University) using the same hypothetico-deductive methods as Darwin himself, or (4) ardent, creative biologists who, whatever one?s qualms about their methods and examples, deliver a revitalizing shock to animal communication theory, sexual selection theory, kinship theory, reciprocal altruism theory, and evolutionary psychology. “

Miller adds, as I would have done from the comfort of my layman’s armchair: “I favor this last judgment“.

Anyway, many aspects of the book are fascinating (as are the author’s regular jibes at colleagues who spend too much time arguing against the “obvious” using fancy mathematical models and too little time in the real world).
But two sections struck me as particularly interesting. My limited understanding of evolutionary biology had it that there are essentially two complementary explanations of cooperation among animals (discounting group selection theories that are frowned upon).
The first is kin selection (and the related idea of inclusive fitness). Here, the idea is that individuals should behave altruistically to the extent that other individuals share their genes (or to the extent that other individuals are likely to share your genes). And what-do-you-know? Parents often care about their offspring.

The second is reciprocal altruism. Here, the individual is expected to be altruistic to the extent that he or she expects this altruism to be reciprocated in the future. So, a vampire bat should share its meal with another bat if it believes that this other bat will reciprocate the favor. And Hallejujah! This seems to be the case.

I was somewhat surprised to see that the Zahavis consider both theories to be flawed. Kin selection, the Zahavis argue, is really just group selection among relatives. It may be true that an individual “would like” to increase its inclusive fitness, but wouldn’t it just be much better if your brother did the work instead of you? So, kin selection is vulnerable to social parasitism (the bane of group selection theories).
Reciprocal altruism, on the other hand, seeks to explain something which does not really warrant such fancy models, the Zahavis feel. Many individuals gain prestige by performing altruistic acts, which increasestheir standing in the hierarchy, which increases their reproductive success. Altruism, then, is a signal of superiority – look!, I can share my food, that’s how strong a bird I am (marry me!).

Very interesting even if I don’t entirely know what to think.