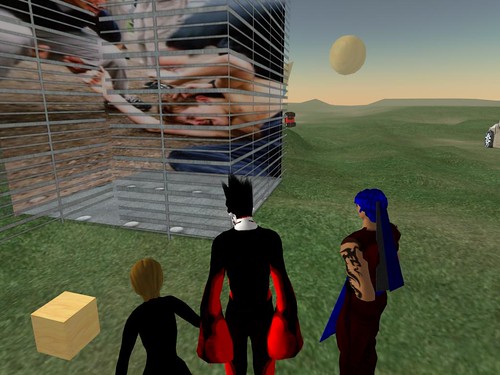 Recently, I’ve been talking to a good number of journalists about Second Life.
I know about virtual worlds, but I always try to point out that I have no particular SL expertise. I haven’t spent enough time in that world to fully grasp its mechanics and particular features. Anyway, that disclaimer rarely makes it into the articles, which may be fair enough.

The most common question I’m asked is this: Why are all these companies/institutions/libraries establishing themselves in Second Life? To this my reply is always: I don’t know, you should ask them, but if you want my guess a part of the reason is that many are eager to become experienced with a possibly important platform for marketing/interaction, are afraid to miss out on an important development and are attracted by the chance for publicity.

Now, this “answer” puts me in the “critical” camp. And indeed I am critical about the potential of SL (and 3D virtual worlds). But only in relation to widespread claims of their world-transforming effects. 3D virtual worlds have their uses but they are not, IMO, universally fantastic. An example: It makes sense to sell clothes and cars in such places but it makes no particular sense to sell books and CDs in there. Also, it makes immediate sense for an international company to use SL for conferences (if the alternative is developing one’s own expensive and inferior system) but it makes no immediate sense for a public library to establish an unstaffed house in SL offering visitors virtual ice cream.

In terms of revolutionary capabilities, I think that SL is comparable to chat rooms and MUDs of the nineties. For sure, it has potential but a large part of the enthusiasm can only be explained with reference to over-enthusiastic hype. To recycle an old cliché: The challenge is figuring out which part.

More
I’ve been quoted for saying that Second Life is unlikely to last for more than 5-7 years. What I mean, of course, is that while 3D worlds will prevail, Second Life itself is unlikely to. This is nothing but a historical observation, neither MUD1, Active Worlds, LambdaMoo, Ultima Online nor EverQuest are market leaders today. Second Life may last forever (depending to a large degree on specifics of its core design) but all I’m saying is, I’d be surprised.
The implications of this is that Second Life specific investments are unlikely to pay off forever – experience gained on use of virtual worlds, of course, will not be lost if SL loses steam one day.