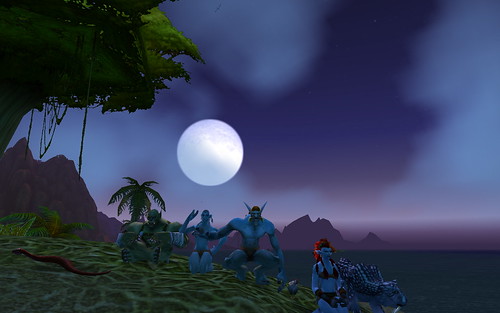 In my master’s thesis on The Architectures of Trust (2MB) I discussed techniques for establishing trust among strangers in online communities such as virtual worlds (around page 61). I said things like:

Another possibility is to give users access to the implicit verdicts of friends. Systems that employ buddy lists (see Figure 3) may let users see the verdicts of their ‘buddies’. For instance, Bob is wondering whether to trust Alice, but being on the buddy list of Eve, he is entitled to the information that Alice is also on the list. Since Bob trusts Eve and Eve trusts Alice, Bob can trust Alice. Such features provide internal verification.

Although the topic of reputation systems in game worlds has been discussed since the dawn of code, implementations have been rare. One reason is that gamers often have an interest in undermining the system (an incentive far more modest in systems like eBay). But recently MonkeyModulator announced the near-future arrival of an interesting WoW add-on enabling players to evaluate each other and to share these evaluations.

I’d be quite interested in news on how that works out for you WoW die-hards.